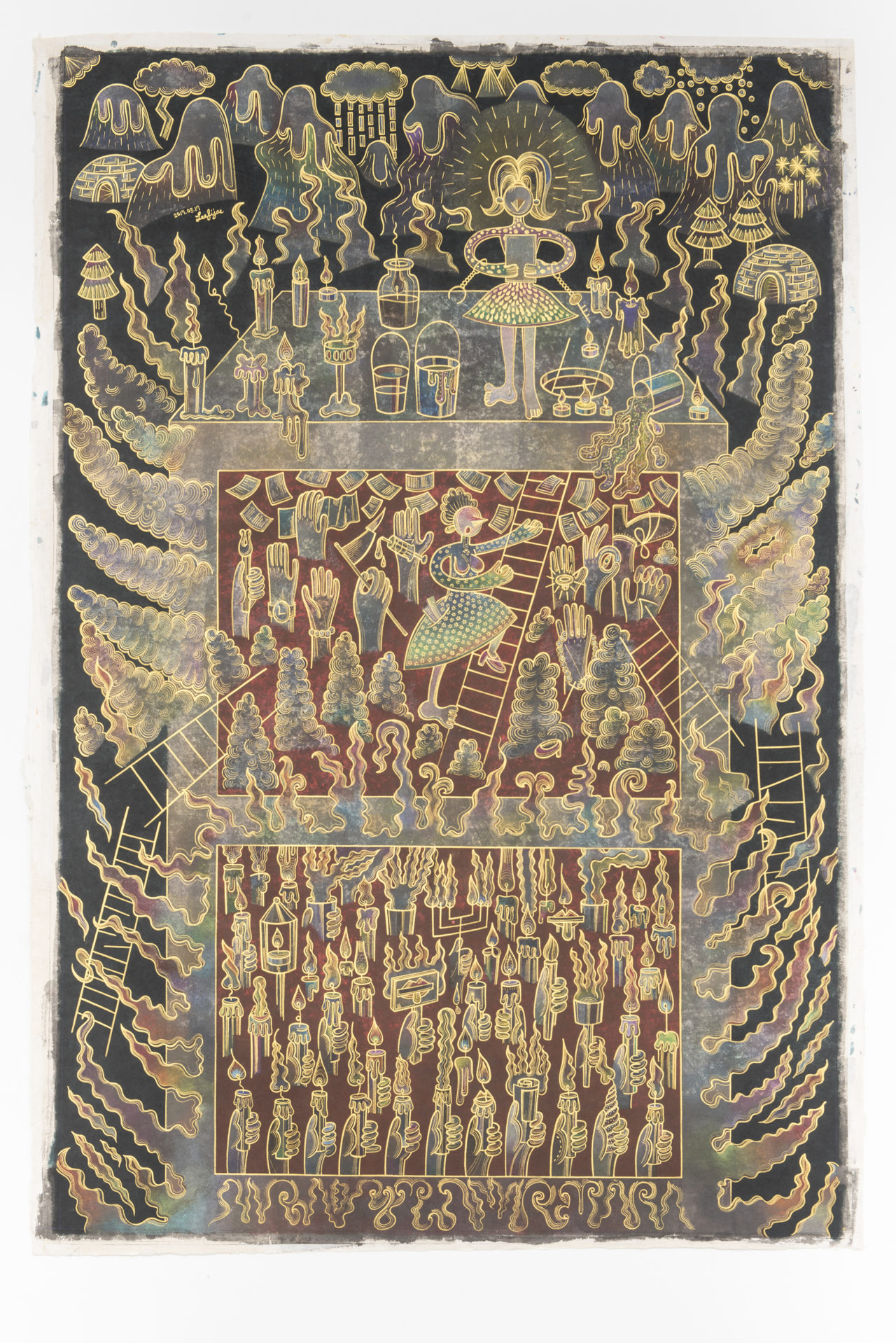 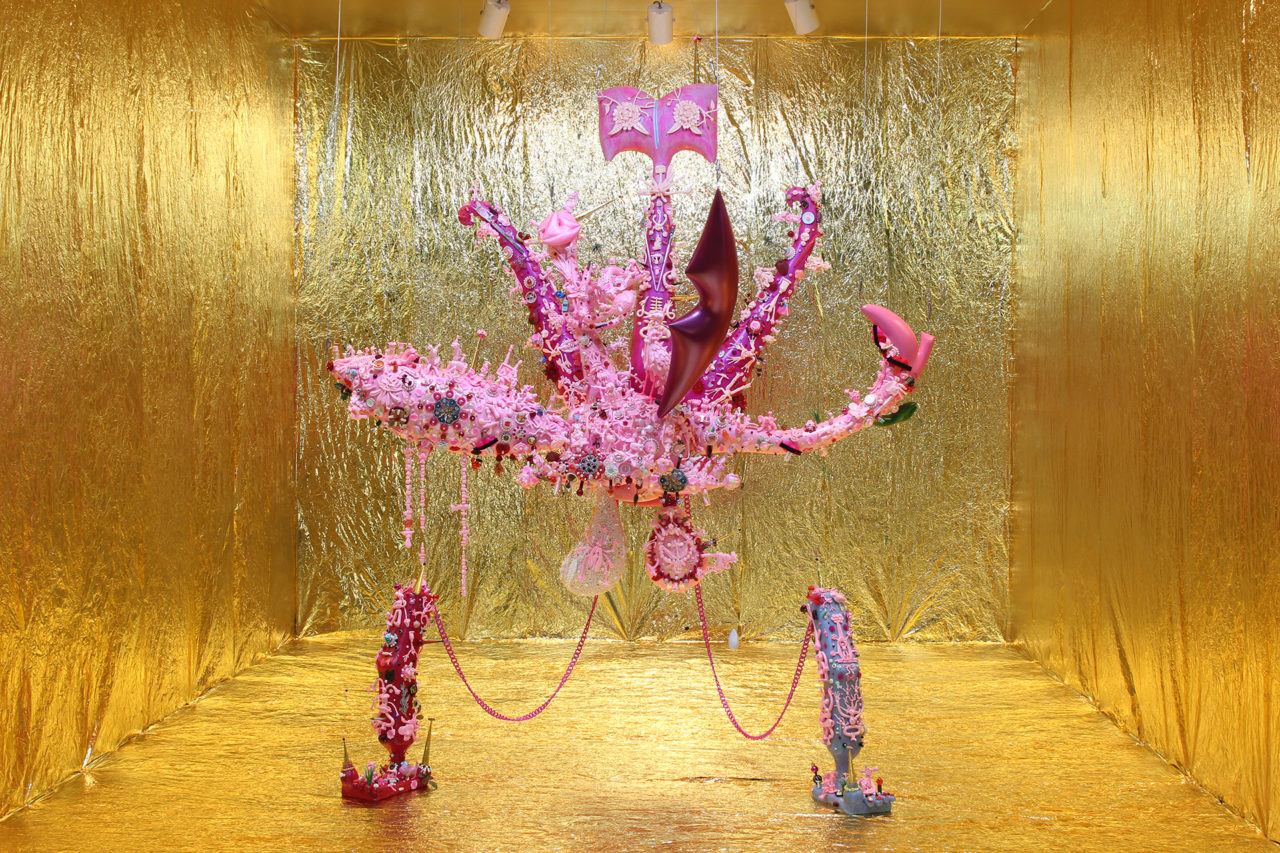 The Whole World on My Body

How much and what appearance of ‘I’, and how is the act of making art embodied in my work? Do my eyes open only towards the outside, and does my artwork exist separately from me? How is the artist embodied in the artwork? How far is the distance between the artwork and the artist? Then, how much can be inferred about the artist by the viewer seeing the work? If the concept of the artist is the artist, what is the viewer looking at? Are they only looking at ‘reason’ and ‘function’? How much can be communicated through the act of ‘looking’? If the artist has to explain the artist’s self – who is immersed within the artwork – what can the artist say? Is the artist only a person, who looks at the outside and criticizes the world’s problems, finding alibis for its existence? These questions are the topics of my works.

I tried to find the answer in the part and the whole, the whole within the part. An artwork of mine is the whole of a mass like my body; however, each of the parts has completion and richness as a whole if you are looking at the each part. Even though my artwork is a work, it is several hundreds of artworks as parts. Even though I am a place as a whole – as a visible body – there are complicated times, events, figures, relations, and social structures that are inscribed in my body. I construct the body of such a space. Even though I am a body, several thousands of bodies – which I am not – are parasitic on my body. They became my emotions, sense, and reason. I let them – right before they turn into me – be involved with the place, which is my body. Each of them is a place and the present, the same as me. Each one is a whole.

By exposing ‘the reversion of invisible things’, in recognizing the essence hidden under my face – which is myself – I combine, juxtapose, and paint and sculpt ‘them’ – the phenomenon of myself -, within a work. By doing so I create complex and multi-layered phenomenon, which is my body, and the double structure between ‘myself’ and ‘them.’

Feeling, listening, and seeing are acts of embracing others in my body. They come to me and become a sense. Like in Kim Chun-su’s poetry ‘Flower’ that says ‘before I call your name, you were nothing but a bodily gesture. But when I call your name, you become a flower.’ By becoming a flower, you made me feel ‘myself’ and then ultimately allowed me to recognize myself. I visualize things in order to respect the materiality and subjectivity of their state prior to coming to me and becoming feeling, thought, and emotion. I ultimately attained my subjectivity by attaching others onto my body. Through others, I became a body that senses myself. In other words, I cannot be ‘myself’ without other things around me.

My works are not the artist’s own perspective turning back from outside to inside. This is the artwork that explores how ‘I’, the creator, embodies the outside world through the sensitivity, senses, and emotion of oneself and how far an external subjectivity and materiality are independent before the outside becomes the content of my internal life. Within this, my otherness, which becomes my memory by constantly connecting with others and creating presence, is created as a figure in the same way. Like writing a diary, I come outside, contact and clash between self and the outside. This becomes visualized through the act of labor, and kneading by hand. While working with this project, I tried to look at how the body which is in the process of pathos and deformity is created through encountering the body of others in the process of embodiment – not as the biological meaning of body -, the body of materiality, and the respondent considering my outside. By doing so my work can be called the phenomenology of my body, which subverts other, the outside before becoming inside. Therefore, even though my entire works can be seen as one work, I try to make parts of works divided into each work and hundreds of artworks.

Fi Jae Lee was born in Seoul, Korea in 1981. After receiving BFA and MFA degrees from School of the Art Institute of Chicago, she has held 11 solo shows and numerous group exhibitions throughout Korea, Japan, France and the United States.

She has an experience of appearing on a New York Gallery HD’s reality show ‘Artstar Season 2’ in 2007 as one of the six main artists. She is a recipient of ‘Arco Young Art Frontier Program,’ a prize fellowship of Arts Council Korea, in 2009 and 2010.

The residency program where she has participated are Goyang Art Studio, National Museum of Modern and Contemporary Art, Korea (2011), Nanji Residency, Seoul Museum of Art (2014), and BilbaoArte, Fundación BilbaoArte Fundazioa (2017).