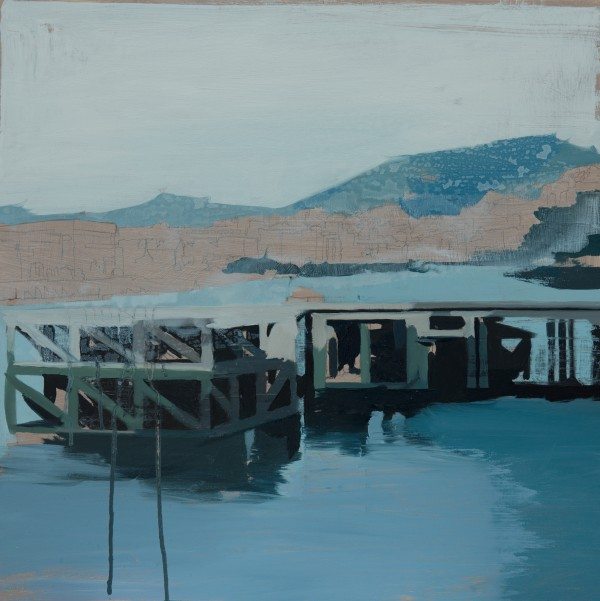 The project raises parallels between natural transformation processes and those provoked by the artist in his artistic creation. Based on the direct ob-servation of surfaces worn or impoverished due to erosion, his interest lies in extolling the structural richness of certain emotion-al enclaves and others loaded with history and symbolism. It is the analytical transla-tion of space which allows him to develop a plastic process whereby the leitmotiv is the constant modiﬁcation of forms in which an error appears not to cause damage or be a setback but is, rather, a valid and desirable business tool. The wide variety of piers along the Nervión Estuary invites us to study these frames as fragmented landmarks detached from their past function, a fragmentation translatable into serial compositions like the polyptych, whose modular network allows it to com-bine the countless states of these concrete skeletons.

Gonzalo Rodríguez is a Graduate in Fine  Arts by the University of Seville. He is con-tinuing his studies in the Master’s Degree at the same university after studying the speci-ality of engraving at the Winchester School of Art (United Kingdom). He has received scholarships from different institutions such as the Rodríguez-Acosta Foundation, the Centre d´Art Contemporani La Rectoría, the Uncastillo Foundation, the Royal Academy of History and Art of San Quirce, the Roy-al Bath & West of England Society and the  Viana Foundation. His work is present in the collections of the Museum of Contempo-rary Art of Cusco (Perú), the Ramón Areces Foundation and the Tres Culturas del Med-iterráneo Foundation and at galleries like the Jovan Popovic (Serbia) and the Rowley Contemporary Art Gallery (United Kingdom).